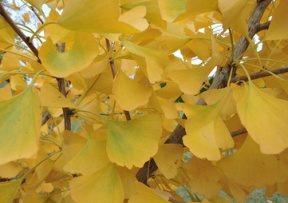 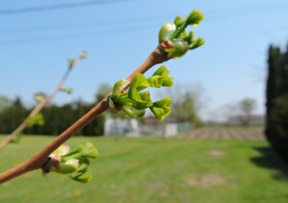 The Ginkgo is the only member of this species that dates back to the dinosaur age. There are Ginkgo trees in China that are over 3000 years old. It is known to be extremely tolerant to many environments, surviving the ice ages as well as the atom bomb at Hiroshima. It is native to China and is dioecious, that is, it has separate sexes. The female will produce nuts but unless there is a male tree nearby, the nuts will not be fertile. Care is needed handling the fresh nuts because the fleshy husk can cause allergic reactions. It has very ornamantal fan shaped leaves that are harvested to make a tea. Ginkgo extracts are sold in health food stores proclaiming many benefits. The nuts are considered a delicacy in China. 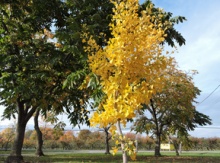 We cannot tell if a seedling is male or female until it matures. By planting several, chances of getting both sexes is more likely.

'Autumn Gold' is a male ginkgo selection that has upright form and golden fall colour. It is well suited as a accent tree or as a pollinizer for female ginkgo trees nearby. Suited for zone 6-9.

‘Dr. Caustan’ is a female ginkgo selected in China for its nut qualities.  A favorite way to prepare them is to salt and pan roast them in olive oil. Suited for zone 6-8. 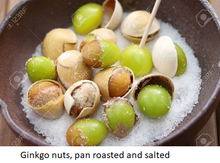 ‘Harvest King’ is a female ginkgo even though the name implies that it is male. It was selected in China for its nut qualities. Our trees have just begun to bear with the nuts falling from mid to late October in Niagara. Suited for zones 6-8.