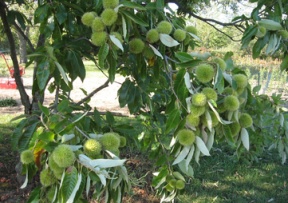 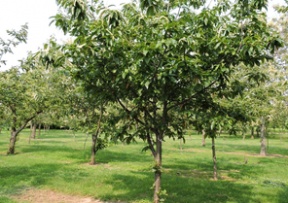 Sorry, no chestnut trees can be shipped to the United States or British Columbia due to restrictions by Agriculture Canada and USDA.

The American chestnut was native over much of the Southern Ontario sand belt areas in Canada. This magnificent species considered the sequoia of the east towered over the forest at 30 m (100 ft) or more. It was largely wiped out by chestnut blight, a disease introduced from the Orient in the late 1800's that destroyed all of the trees in the native range from Southern Ontario southward to Georgia. It was a devastation of enormous proportions.

The Chinese chestnut and its hybrids are largely resistant to this disease and have been used to replace it, not as a forest tree but as an orchard and yard tree. The Chinese/American hybrids are more cold hardy but less resistant to blight. In Europe, when the European chestnut was threatened by blight, crosses were made with Japanese chestnut to produce resistant hybrids. Tree size ranges from 12-18 m in height and 15 m wide (60 x 45 ft) at maturity.

Chestnut gall wasp, another imported pest from the Orient brought in on grafting wood in Georgia has spread over Southern Ontario recently. To avoid spreading this pest further, we are asking customers to monitor the trees they purchase for the galls which appear in late May. If found, the galls should be removed and burned. This will eradicate the pest before it emerges to lay its eggs. 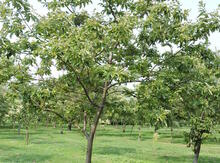 We use the most hardy blight resistant seed sources for our chestnut seedlings. They are open pollinated in our mixed species seed source orchard. The trees are medium size growing to 15 m tall and spreading about 12 m (50' tall & 40' wide). The nuts are medium to large size and sweet and flavorful. Two trees are needed for nut production.Suited for zones 5b-8

PLEASE REVIEW THE INFORMATION ABOUT THE CHESTNUT GALL WASP. 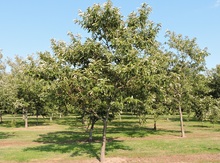 Our Chinese/American hybrids are collections of crosses made by early breeders. These productive trees exhibit a little less blight resistance but greater hardiness than the pure Chinese chestnuts. The upright trees and medium size nuts show characteristics very similar to Chinese chestnut. Two trees are needed for nut production. Suited for zones 5a-8. PLEASE REVIEW THE INFORMATION ABOUT THE CHESTNUT GALL WASP. 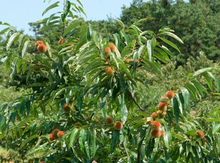 These chestnut seedlings are offspring from Yo Ma and Ok Quang, two Korean chestnut cultivars. These two parents were selected in Korea for their gall wasp and chestnut blight resistance. We are offering these seedling trees with the possibility that they will also carry the genes for wasp and blight resistance. They would be hardy for zones 6-8. 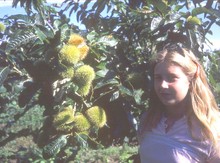 Work was done at the Connecticut Experiment Station with chestnut for almost 100 years. 'Lockwood' was one of their selections of a cross of (C. crenata x C. sativa) x C. dendata. This is a Japanese/European crossed with American chestnut. It was open pollinated in 1946.by a male tree in Washington DC presumed to be American chestnut.

'Lockwood' produces a very large chestnut and its off-spring are handsome upright trees that usually produce large nuts too. Blight resistance and gall wasp resistance appears to be fairly good from the seedlings too. We recommend the seedlings for zone 6-8. 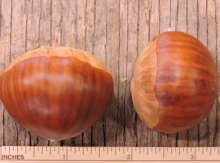 To overcome the ravages of blight in Europe, Breeders in France made crosses of the European x Japanese chestnut. The Japanese genes provided blight resistance and large nut size. The resulting crosses produced very productive trees with large size nuts. Our seedlings are from these hybrids. Nut size can vary from medium to large. Tree size is expected to be larger than Chinese and more upright. Two trees are needed for nut production. Nut ripening may be later than Chinese and the trees are less hardy. Suited for zone 6b-8.

PLEASE REVIEW THE INFORMATION ABOUT THE CHESTNUT GALL WASP. 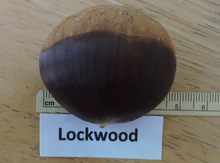 'Lockwood' is a very large nut introduced by the Connecticut Experimental Farm. It is a hardy complex hybrid. It has good crops of very large nuts. It has reasonably good manageable blight and gall wasp resistance. Suited for zones 6b-8. 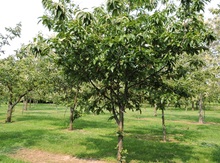 'Gideon' is a selection from the chestnut collection of Gerg Miller in Ohio. It is a productive tree with large nuts. It has good blight resistance. It is a new selection on trial with us.Suited for zone 6b-8

‘Yo Ma’ is a Korean chestnut (Castanea crenata) selection that produces a large mid-season ripening nut. It was selected for resistance to chestnut blight and chestnut gall wasp. This spreading moderate growing tree is very productive. ‘Yo Ma’ is grafted on Korean chestnut seedling rootstocks that also show good bud mite resistance when they are grown out. Suitable for zone 6b-8. ‘Ok Quang’ is a Korean chestnut (Castanea crenata) selection that has good resistance to chestnut blight and chestnut gall wasp. It produces a large mid-season ripening nut. The tree has medium vigor but is very productive. ‘Ok Quang’ is grafted on Korean chestnut rootstocks that also show good bud mite resistance when grown out. It is suitable for zones 6b-8.